No, It's Not Rocket Science

I attended a presentation recently where the speaker insisted that the system he was selling was technically highly-advanced. When words failed him, he resorted to the ploy of lobbing in an image of Albert Einstein and having the brilliant scientist say it instead.

The only problem was that the system being presented was by no means as advanced as our presenter suggested.

Look at it from his point of view. You're a thinker who's shifted the world on its axis and grappled with truly complex ideas, yet worked to keep things as simple as possible ("but no simpler"). For your efforts, you've become shorthand for anything faintly scientific and in many cases quite banal. You, or someone who looks very like you, adorn pub-quiz posters, Junior Scientist kits and second-rate presentations.

In many ways, it's great to see such a brilliant mind as a man of the people, but there's a real danger that what you stand for has become devalued by the lazy use of your image to signal 'the science bit' of any pitch that demands a little concentration from the audience.

And that when it's attached to unremarkable technology, it suggests that what follows really isn't rocket-science but something quite ordinary.

Over To You: Which icons have you seen cheapened by being indiscriminately applied to a whole assortment of causes?
Posted by Gerard Tannam at 4:51 pm No comments:

Heineken Fluffs Its Moment Of Truth 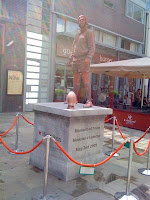 Over the past number of months, I've been enjoying Heineken's skilful advertising around its sponsorship of European Rugby.

Walking in Dublin's Temple Bar on Friday, I was delighted to see this street-theatre tribute to its Greatness Lives On campaign (which features pivotal moments from previous cup games cast in bronze and put on a pedestal for posterity). This one celebrated the Moment of Truth at the upcoming Heineken Cup Final in Edinburgh.

But at the Munster-Leinster semi-final a day later, Heineken's sure-footed progress came to a juddering halt in the programme notes of its Managing Director in Ireland, David Forde.

Now Mr. Forde isn't alone in messing up this prime opportunity to speak to a captivated audience of rugby fans; the match programme is poorly designed and badly written and shows little improvement from the amateurish publications that used to be sold at the old Lansdowne Road venue at both soccer and rugby games thirty-odd years ago.

But Mr. Forde really should know better. After all, his brand is rightly celebrated for its original and playful advertising. Instead, his 'Welcome From Heineken' address features the hackneyed phrases of the dinner-dance host and stops just short of an announcement of a raffle at half-time.

He tells us that, "occasions don't come much bigger than the meeting of Munster and Leinster in this Heineken Cup semi-final" before going on to say that he "would like to thank the many organisations, as well as our own Heineken staff, who have worked tirelessly to ensure that everybody enjoys a great day out." His message had me turning quickly (without further ado!) from the programme to enjoy instead the pre-match warm-up of the two teams on the pitch.

What a missed opportunity! Heineken shrewdly invested in a competition which has become a real poster-boy for commercial sport and Mr. Forde prattles on like a proud parent at prize-giving. Why didn't he invite one of his sure-footed copywriters to script his address?

Like many others in the board-room (who insist on golf-outing style photographs in the Annual Report), Mr. Forde seems to believe that branding stops at the door of the marketing department. His address to rugby fans leaves Heineken flat-footed and undermines much of the great creative work with which his brand is associated.

Over to you: What other great branding efforts have you seen held up short of the try-line thanks to poor decision-taking by other members of the team?
Posted by Gerard Tannam at 9:41 am 2 comments: