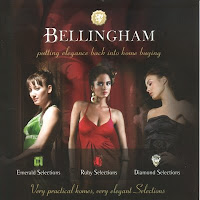 If ever we needed evidence of just how completely property developers have lost the plot, this recent flyer dropped through our letterbox provided it. 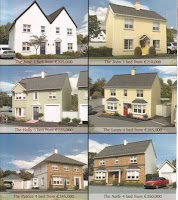 Do the sellers really believe that young couples, many of them with babies in tow, are going to fall for this 'sex outside the city' gambit?

It only confirms our impression of the last decade or so that builders simply threw up houses and apartment blocks with no understanding of the people who would eventually live in them.

Build it and they will come? Somehow, I don't think so.
Posted by Gerard Tannam at 2:46 pm 2 comments: 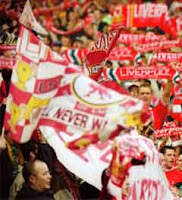 I have a client, Marathon Sports Travel, who will take you 'to the heart of the action', whether that's at places such as Anfield and Murrayfield, or whichever foreign field plays host to the bloodied Lions of Great Britain & Ireland or to the red-shirted heroes of Munster or Manchester as they battle to be conquerors of Europe.

But I have a challenge for them. More than any of these places, I want to be taken to the heart of the action at the European Cup Final at the Olympic Stadium in Rome in May 1977, or to the FA Cup Final at Wembley in May 1986. In fact, I'd happily settle for any of the more run-of-the-mill matches that were played up and down England and across Europe by own red-shirted heroes anytime from the early '70s to the mid '80s.

You see, I'm a Liverpool fan, always have been, always will be. Que sera, sera and all of that.

But I realised something awful last weekend when the current Liverpool team stumbled yet again and allowed Man United to take charge of things at the top of the Premiership table: I don't care anymore.

Now this isn't a question of sour grapes or of being a fair-weather fan or anything. It's just that I don't recognise Liverpool anymore. They're no longer my team or our team, they're Benitez' team. They no longer show the spirit that marked out the great Liverpool teams (even those who finished second-best from time to time in England or Europe).

This is a team which gives the ball away without a thought or shuttles it fearfully from one player to another, back and forth, forward and back, because most are unwilling to take responsibility. When many of them get the ball, they don't seem to know what to do with it.

This is is a team of little intelligence. Sure, there's no shortage of endeavour or brute courage but this team is unrecognisable from the Liverpool teams of old, which played with confidence and style, and which had leaders in every position who were unafraid to seize the initiative and make something happen.

Today's team often bear a haunted look, as well they might, for the ghosts of old aren't even consigned to the record-books; many of them have turned pundit and dissect the performances of the current crop of players with the same calculation and edge with which they broke down opposing teams and turned defence to attack in an instant.

Rafael Benitez has carefully built a mediocre team in his own image and squeezed the life out of this great club as he's done so. Under his watchful eye, players who arrive filled with hope and brio wither away. Is there a single import who has improved during his time at Liverpool? Players shrink under his management and when they move on they often seem to find a new lease of life and to rediscover their old verve and intelligence.

I do not like what Mr. Benitez has done to 'my' Liverpool one bit (mind you, his predecessor was hardly any better). I remember being similarly offended by what some of the awful advertising of the late '90s did to 'my' Guinness.

So Marathon Sports Travel, please don't take me to see Benitez FC, masquerading in the colours of my team. Take me instead to the heart of the action at even the meanest fixture in a Liverpool campaign sometime in the late '70s or early '80s.

I don't even care if they win, though I'll be shouting myself hoarse until the very end. I just want to see Joey Jones or Ronnie Whelan or Kenny Dalglish play the game the way the Liverpool game is played. With confidence on the ball, with skill and with courage but, above all, with real footballing spirit.
Posted by Gerard Tannam at 9:03 am No comments:

WHEN WE think of Ireland Inc, there are a few key brands and personas that immediately come to mind. Baileys Irish Cream and Guinness, U2 and Colin Farrell, Temple Bar and Munster Rugby – all national phenomena with international appeal and recognition, writes Brian O'Connell in today's Irish Times.

The article includes my own take on what makes an Irish brand, as well as thoughts from Michael Cullen of Marketing Magazine. With Irishness and its value in the international marketplace under scrutiny following Waterford Crystal's shattering news, Read On for the full article.
Posted by Gerard Tannam at 12:19 pm No comments:

How The Mighty Have Plummeted

Following our Brandest Plans Client Workshop on Thursday, I found myself marvelling with a couple of clients at the news that the D4 group of hotels in Dublin's exclusive district is offering a number of rooms at €20 per night.

Now for those of you unfamiliar with our city's exclusive district (don't be shy, I'm only an occasional blow-in myself), the D4 hotels include the former Berkeley Court and Jury's Hotels, two venues where well-heeled punters laid their equally well-groomed heads for hundreds of euros in those crazy, hazy Celtic Tiger days of yore. At least twenty four months or more ago, if my failing memory serves me well.

I'm not sure that I've witnessed such extraordinary devaluation of currency in my own lifetime. We hear dramatic tales from other (unstable) countries or eras where wheelbarrows piled high with big denomination notes (a million lira, anyone?) were abandoned by debtors outside the shops of those they owed money to when they realised that the wheelbarrow was likely to be worth more than the mountain of loot that sat perched on top.

An article in the following day's Irish Times talked of other major players who were leaping over the self-same cliff (the exclusive Ashford and Dromoland Castles dressing up €58.33 rooms as 'two nights bed and breakfast for €87.50 per person per night, with a third night thrown in for free'. Now that's creative accounting.

Whilst there's an argument for suggesting that these hotels are simply responding to market conditions, what does it say about the prices they were charging when we were falling over ourselves to spend our money? And about the real value of their brands?

Maybe it's a simple matter of life or death for the business in which case I'm not inclined to be too unsympathetic, but how are they ever going to recover their sense of value in the minds of their customers?

Experience from other times and places suggests that quality brands bravely hold their value even in difficult times. And emerge on the far side stronger than ever (if briefly a little lighter in the wallet).

But perhaps the real problem lies in the tendency of opportunists and number-crunchers who masquerade as hoteliers to think only in terms of heads on pillows and the currency of bed-nights?

Surely a hospitality brand is about much more than that?
Posted by Gerard Tannam at 7:18 am 3 comments: