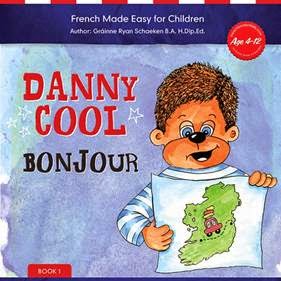 For most people born and raised in Ireland, our first introduction to learning a foreign language was at the age of twelve or thirteen when we looked at subject choices for secondary school.

That is five or six years later than our European counterparts who are introduced to a second (or in some cases a third or fourth language) at the tender age of seven. From a learning perspective, a child's brain at seven or earlier is the perfect sponge for absorbing new languages. And they are happily unselfconscious about practicing pronunciation in front of their peers.

A New Language Made Easy

Teacher and entrepreneur Grainne Ryan Schaeken, introduced us to FrenchBooksForKids.Com on this week's Kickstart Your Business.  Looking at the market, she saw there were no storybooks in French aimed at English speaking kids and so developed Danny Cool, a series of humorous stories in French, featuring an Irish family in leafy Foxrock. Beautifully illustrated, the series is set to have  Irish children exclaiming 'J'adore Danny Cool' when they reach for the books. 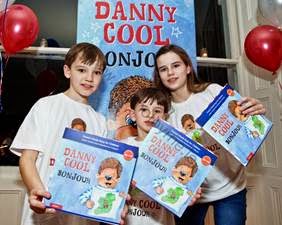 As Gerard suggested on the show, students are attracted to a particular book, not because they want to learn something new, but because they want to read the story. Bringing out the humour and playfulness of the stories themselves on the website, rather than the learning opportunity behind them, will better attract and engage Grainne's real customers (who will in turn persuade mammy or daddy to put their hand in their pocket).

How can Grainne bring the story of Danny Cool to life through her website? Listen back to the show on Kickstart Your Business and let us know what you think.

Kickstart Your Business is broadcast live on The Right Hook on Newstalk106 in Ireland every Thursday at 6.40pm and is available on Playback.
Posted by Gerard Tannam at 10:30 am 4 comments:

Have Wristband, Will Travel Safely

It's every parent's nightmare. You're out with  one or more small children at the zoo or in a busy supermarket and as you're paying for an item or tying a shoelace, a child goes missing. Rational thought goes out the window and panic threatens to overwhelm you. Until your child is safely back in your care, the supermarket or zoo can feel like the most dangerous place in the world. It's one of the most gut-wrenching feelings any parent can experience and anything that can help alleviate the worry and stress and reunite you safely and quickly with your child would be a godsend.

This week on Kickstart Your Business, we featured a product that will have parents everywhere breathing a sigh of relief. IDme, a safety wristband, was designed and developed by Dee O'Leary, a mother of three whose experience of losing a small child in a local supermarket sparked a great business idea that is fast becoming an essential travel item for small children. The award winning wristband holds essential information that means a good samaritan can quickly help the lost and vulnerable child to reunite with their anxious parents.

This is one of those business ideas that's so simple, it's a wonder we didn't think of it ourselves! The possibilities are endless for a product that is so fit for purpose and meets an instantly recognisable need in its target market. And that market extends beyond the parents of wandering children and can cater for sports enthusiasts or individuals with medical issues or special needs. As Gerard pointed out on the show, there is also endless opportunity to customise the strap and create a range of designs that will appeal to children and adults alike (much like Swatch did with their watches).

What type of designs could Dee use to customise her product and create individual and eye-catching safety wristbands ? Listen back to the show on Kickstart Your Business and let us know what you think.

Kickstart Your Business is broadcast live on The Right Hook on Newstalk106 in Ireland every Thursday at 6.40pm and is available on Playback.
Posted by Gerard Tannam at 12:16 pm 2 comments:

Three Wheels On My Coffee

For many budding entrepreneurs, renting the space to house a great product is simply beyond their modest budget. Then there's the challenge of choosing the right building in the right location to attract and engage your target customers. And what about all of those lovely customers that are just out of arm's reach because your premises is located a street too far for them to make the journey to buy from you?

If The Mountain Won't Come To Saltpeter

Let Saltpeter come to the mountain! That's exactly what this week's featured Kickstart Your Busines  Saltpeter has set about doing. Founded by freshly-baked entrepreneur Jenny Lyons, Saltpeter is a three-wheeled pop-up shop that sells fabulous coffee and irresistable baked goodies. Rather than waiting for her customers to turn up, Jenny's mobile offer will come to them, enticing them closer with the smell of feshly ground coffee and delicious baked treats. Makes you want to rush to the window and check if Saltpeter is outside!

Already Jenny has successfully created a brand with oodles of personality and with her scaleable business model in place, she's gearing up to take over the world, one coffee and treat at a time. Presenting the brand at every opportunity is essential when your premises is a three-wheeler van, and wearing a uniform that reflects the fun personality of Saltpeter will add even greater recognisable appeal to the brand (and no George, Jenny will not be going with your recommedation of a drindl as the perfect uniform!).

What other easy ways can Jenny help bring her 'teeny weeny but big on personality' brand to life ? Listen back to the show on Kickstart Your Business and let us know what you think.

Kickstart Your Business is broadcast live on The Right Hook on Newstalk106 in Ireland every Thursday at 6.40pm and is available on Playback
Posted by Gerard Tannam at 9:50 am 1 comment: