Adding Up To A Fun Way Of Learning

The child at play learns at a rate rarely bettered in the more formal learning environment of classroom and lessons, so the challenge for the teacher is to devise a game that enables the young learner to enter so fully into the spirit of the game that they learn without realising it. Throw an element of healthy competition into the mix, and you can create a game that the child never wants to end.

The Chase Is On

When primary-school teacher Angela McCarthy (our Kickstart Your Business featured guest this week), took a career break to raise her own children, she found herself devising games to help them learn maths in a fun environment. One such game, Chase Across The Square, proved such a hit with her own children that she was prompted to bring this and other games to a wider market.

Less than a year after setting up her business KDM Games, Chase Across The Square, a board game for players from aged 7 upwards, is now available in toy shops across Ireland, and is receiving rave reviews from children and adults alike.

Making One Plus One Equal More Than Me-Too

Shane (Coleman, standing in for George) and Gerard admired Angela's devising of a game that's instantly appealing to players, including many who struggle more than most with numbers, and easy to set up and play. Many of the elements, including the colourful squares, the tokens and the tally sheets, really bring numbers to life and enable players to throw themselves wholeheartedly into the game itself.

However, Gerard suggested that with Angela setting her sights on playing the game of business beyond Ireland (she has a number of other board games in the pipeline), she needs to invest more in the branding of her new company - there's a generic look and feel to it - and introduce a more compelling narrative to her would-be customers and distributors, so that Chase Across The Square and her other board games really jump off the shelf.

Now It's Your Turn!

How do you suggest that Angela makes it all add up to a global success story for KDM Games and Chase Across The Square?

Listen back to Angela on Kickstart Your Business and let us know what you think; we'd love to hear from you.

Kickstart Your Business broadcasts at 6.20pm every Thursday on Newstalk's The Right Hook, and is available on playback immediately following the show.

When I'm not helping to Kickstart Your Business, I work with business-owners of all shapes and sizes to help them build a brand that stands up to the competition and stands out in the marketplace. You can find out more about my work at Islandbridge.
Posted by Gerard Tannam at 5:59 am 2 comments:

He Sells Seaweed From The Seashore

Sweden has its saunas, Italy its mud-baths, and Turkey its rub-a-dub tub, so why not Ireland our own traditional bathing-place? Well, shore we do, for our ancestors, particularly on the western seaboard, were rather partial to soaking in a seaweed bath, which was prized for its many therapeutic benefits. And although seaweed baths have enjoyed something of a resurgence of late, by and large they're to be enjoyed only as part of a spa package rather than as a regular treatment.

And The Seaweeds That He Sells...

An accountant and business executive trawling the shores of this island for seaweed cuts an unlikely figure, but Richard McManus (our featured guest on this week's Kickstart Your Business) decided to indulge his own passion for seaweed baths by setting up Cara Mara, a home-care package that allows you to create your own revitalising seaweed bath.

Now, for the price of a takeaway, you can have your own Cara Mara luxury seaweed bath package delivered to your home, leaving you free to sink beneath the waves as they lap against the edges of the tub and soak up that briny goodness.

Soft As A Baby's Skin Business 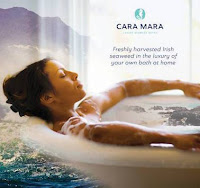 George and Gerard were treated to the sounds of Newstalk's own Henry McKean slipping into his Cara Mara seaweed bath, and agreed that Richard's initiative had the makings of a great business.

Both also agreed that Richard makes the emerging entrepreneur's common mistake of being reluctant to cut to the purchase on his website (which is his primary sales channel); the visitor needs to dive deep into its pages before reaching the 'buy now' button.

Weed All About It!

What do you suggest Richard does to get more people slipping beneath the waves of their own luxury seaweed bath? Listen back to Richard (and Henry) on Kickstart Your Business and let us know what you think.

Weed (ahem) love to hear from you.

Kickstart Your Business is broadcast live on The Right Hook on Newstalk 106 in Ireland every Thursday at 6.20pm, and is available to listen to on Playback immediately afterwards.
Posted by Gerard Tannam at 8:05 pm 3 comments:

When five whiskey-loving friends, all veterans of different parts of the drinks industry, decided they wanted to break out and set up on their own, creating a distillery was the obvious, though not easy, option.

Not easy because the drinks industry worldwide is dominated by some giants with big fists and deep pockets, the well-known brands that stand shoulder to shoulder against the newcomer on bar-shelves across the world.

Our featured guest on Kickstart Your Business, Gary McLoughlin of Glendalough Distillery, knew that a full frontal assault was unlikely to suit this new challenger brand.

Instead, he and his partners looked nearby to St. Kevin of Glendalough for inspiration, and now produce a wide range of spirits, including poitin, in what they term Ireland's first craft distillery.

New Habits For A Lifetime

George and Gerard toasted Gary's courage and initiative in setting up a new distillery from scratch, and admired the newly-produced video telling the story of St. Kevin and Glendalough that sets the scene for their take on this ancient spirit.

Whilst the video is a powerful shot of storytelling, Gerard suggested that the website version might be a little too long for a first time visitor, who is more likely to be won over first by the more arresting images that are displayed to great effect elsewhere on the site.

Not Just The Drink Talking

What do you suggest Gary does to get more people from around the world enjoying Glendalough's high spirits from holy places? Listen back to Gary on Kickstart Your Business and let us know what you think.

Kickstart Your Business is broadcast live on The Right Hook on Newstalk 106 in Ireland every Thursday at 6.20pm, and is available to listen to on Playback immediately afterwards.
Posted by Gerard Tannam at 9:09 am No comments: